My redneck mountain upbringing doesn’t readily lend itself to sampling exotic foods; it’s a failing I’ve tried to correct little by little over the years.  I look with envy at others happily crunching away on octopus or salmon roe, seemingly oblivious to the fact that what they are eating is, infact, disgusting.  Yet they look so fulfilled, so adventurous that somehow I can’t help but feel left out while staring down at my plate of familiar, predictably boring food.  So this year, I’m determined to branch out my tastebuds and what better place to start than in the International District in Seattle.

As any adventurous eater can tell you, there are definite places to avoid while searching out ethnic food, so I always rely on a recommendation from someone who’s eaten at a specific place and survived.  I friend of mine posted a photo of some succulent honey walnut shrimp from the Honey Court Seafood Restaurant awhile back and it intrigued me.    I just couldn’t get that shrimp off my mind.  So last Sunday, we headed down to the Honey Court for a taste of said shrimp and adventure.

The place was packed, which I took as a good sign and luckily the lobby has the requisite giant fish tank which seems to grace every Asian eatery from Seattle to China, so London had plenty of fish to stare at while we waited for a table.  Keeping true to my vow of being a more adventurous eater, I ordered crispy prawns with green onions off the dim sum cart as soon as we were seated and they were straight up awesome.  Fueled by my success in food cart pickings, Edgar chose a sticky rice packet which he said was great and I took his word for it.  I couldn’t push my adventurous luck that far, at least not yet.  We ordered more food, including that infamous honey walnut shrimp and as it piled high on our table, we realized that maybe we’d overestimated our eating abilities.  Still, we wielded our chopsticks high and valiantly tried to finish our chow mien but in the end, we had to concede defeat.  After all, we had to save some for dinner because who doesn’t love Chinese leftovers?

My son London has a lot of hair and it’s beautiful.  It’s shiny & soft and full of baby curls, hence I could understand my husband’s hesitation at loping it all off.  Yet after a few, “she’s so cute” comments and some solid competition for Cousin It’s hairdo, I had decided that a little trim, at least, was in order. In fairness, I should really give the credit for making this decision to my mom, who has told me incessantly that London’s hair in his eyes all the time was a form of child cruelty.  My habit of always forgetting to bring toys for London anywhere we go must just slay her. 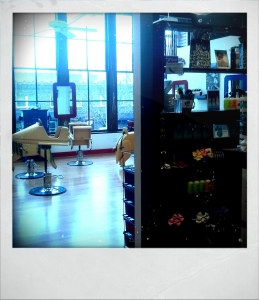 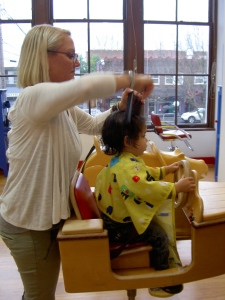 Li’l Klippers, a kids hair salon located on the 2nd floor of the Wallingford Center in Seattle, was just the place for this time honored toddler rite of passage.  After all, a baby’s 1st haircut instantly turns your chubby cheeked infant into a independent & grown up toddler, and a proper setting for that kind of transformation is essential.  The salon is darling, with different wooden characters to sit in, plenty of books to read and a bright, vibrant atmosphere. After choosing the boat to sit in, London settled in like a champ and let Melissa, the stylish, work her magic.  She was great with him and handled the paparazzi burn of our camera flashes like a pro.  When it was over, she gave us a little card with a few of London’s fallen locks, a sweet touch to pine over one day when he decides to shave his head in teenage rebellion. 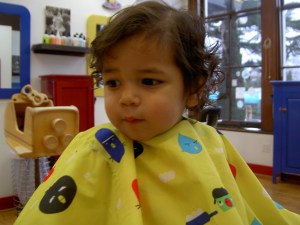 *Located inside the Wallingford Center on the 2nd floor*

I am the last person on this planet to rush to a mall for entertainment but I have been keen to take London here ever since he learned how to walk.  The first time I set foot in Kids Cove was a few years back with a heathen child I was nannying at the time and though I secretly tried to fade into the gaggle of new moms out of shear embarrassment over the child’s monster like behavior; I was impressed with the Kids Cove. It was bright & clean & fun to look at and it occurred to me that someday, I would like to take a non demon-child there to enjoy it.

Flash forward some 5 years or so and there we are, my cool kid and me, sizing up the Kids Cove on a rainy Tuesday afternoon.  It was as big and colorful as I remembered and now, having joined the mama ranks, I found it even more appealing.  There is a bench which surrounds the play area and only one entrance, which makes a possible toddler escape just a little bit harder.  The play structures are soft and the floor is padded, with neat little cubbies for shoes lining one wall and built in hand sanitizers.  All in all, Kids Cove puts most other mall play areas to shame. I mean, how can you compete with a crawl-thru ferry and sandcastle slide? You just can’t. 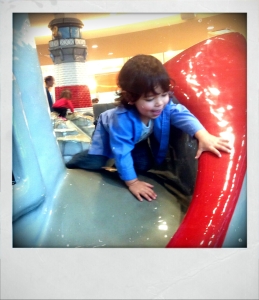 I used to live mere feet from this park, and many of my favorite childhood memories are wrapped up in its shrubbery.  I perfected my tree climbing skills there, picked blackberries off it’s slopes and roared with laughter the 4th of July my daredevil uncle caught it’s grassy bank on fire.

Though spread across only 5 acres, Grand Ave Park is long & narrow and beautifully maintained, so it gives the illusion of being much bigger than it truly is.  The city of Everett acquired the land in 1906; it was sold to the city by the Everett Improvement Company for the grand total of $1.  Many stately houses line the east side of the park, including the home of Henry M. Jackson, a US congressman and senator.  His house had been built by another Everett notable, William C. Butler, a conservative Republican banker who had had great influence over Everett’s early development.  When Mr. Jackson, a Democrat, purchased the house in 1967, he was said to have savored the irony of owning the house of the tight-fisted ‘ol Republican not only because of their political differences but also because he had delivered newspapers to that same house as a child.

Grand Ave Park is probably not the place you’ll want to visit for a toddler playdate or a power jog.  There’s no playground or plastic jungle gym or batting cages.  Just a long expanse of beautiful views, big trees and green grass.  When I walk along its promeade, looking down on the twinkling lights below, I can nearly imagine myself eleven again, running ahead, wild & free. It’s a mirage that I’m always grateful for.