I had a disastrously bad relationship in my early 20’s and as hellish as it was at least two good things came out of it; my hard earned resolve to demand better for myself and a newfound love for pupusas.  Pupusas hail from El Salvador and were originally created by the Pipil tribe many centuries ago.  It wasn’t until the 1980’s that they arrived here in el norte, carried in the hearts and stomachs of thousands of Salvadorans fleeing their tumultuous & civil war torn country.  Since then, pupusarias have popped up all over the U.S. and are especially prevalent in LA, where this little gem resides.

Mi Carbonero Restaurant is similar to a lot of Latino owned restaurants around LA; every possible window surface is covered with flashy photo evidence of just how good their food looks, complete with a poster of international phone cards they also sell. You know, just in case you desperately need a phone card with lunch.  The interior of Mi Carbonero is pleasantly cool, a  dining requirement in the often stifling LA valley, where the temperatures can reach into the 90’s for days on end.

Pupusas are essentially stuffed tortillas, filled with all sorts of delectable combinations; my favorite being the tried & true Queso con Frijoles.  That’s cheese and beans for my gringo friends.  Once the pupusas are delivered to your table, you’ll get the traditional accompaniments, a cabbage slaw otherwise known as curtido and a tomato sauce.  Now for all my pupusa eating novices out there, these two garnishes are as important to a great tasting pupusa as the pupusa itself and I dare anyone to argue otherwise.  To find a pupuseria which produces both equally well is a perfect trinity, a trifecta of taste bud excellence and let me tell you, it can be damned hard to find.  So I was pleasantly surprised when Mi Carbonero delivered just that.  A tiny place in the sea of humanity that is LA, and I had found pupusa perfection.  Now, if only I didn’t live 3 states away…. 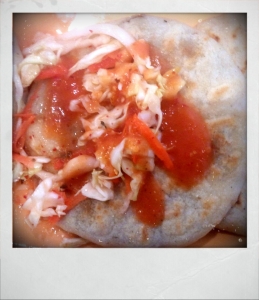