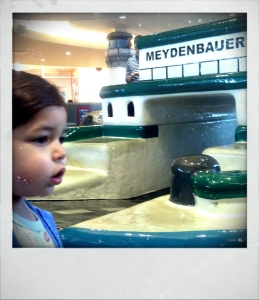 I am the last person on this planet to rush to a mall for entertainment but I have been keen to take London here ever since he learned how to walk.  The first time I set foot in Kids Cove was a few years back with a heathen child I was nannying at the time and though I secretly tried to fade into the gaggle of new moms out of shear embarrassment over the child’s monster like behavior; I was impressed with the Kids Cove. It was bright & clean & fun to look at and it occurred to me that someday, I would like to take a non demon-child there to enjoy it.

Flash forward some 5 years or so and there we are, my cool kid and me, sizing up the Kids Cove on a rainy Tuesday afternoon.  It was as big and colorful as I remembered and now, having joined the mama ranks, I found it even more appealing.  There is a bench which surrounds the play area and only one entrance, which makes a possible toddler escape just a little bit harder.  The play structures are soft and the floor is padded, with neat little cubbies for shoes lining one wall and built in hand sanitizers.  All in all, Kids Cove puts most other mall play areas to shame. I mean, how can you compete with a crawl-thru ferry and sandcastle slide? You just can’t. 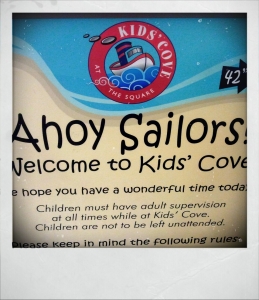